Communication is more than words can say

Once upon a time, when record companies ruled the music industry, a major jazz label discovered a promising young Venezuelan pianist. They flew her to New York to record with some top players. She was an amazing pianist, a prodigy. It was a coup for the record company, and the opportunity of a lifetime for her.

When the musicians came together for their first session, it sounded amazing from the first note. But in the ears of the saxophone player something was not quite right, not quite all it could be. After a few minutes of playing, he placed his horn on the piano and whispered, “Lady, jazz doesn’t go like that, it goes like this,” and he shuffled, and loped, and half danced a few steps across the studio floor.

Everyone in the room was smiling now. The band started playing again. The piano player, and everyone else, had understood something that could not have been said in words. You could hear the difference immediately. The group went on to make several successful recordings together.

How is it that some the of best lessons occur outside of the conventional channels of communication? When communication is timed to fit the moment, it becomes creative expression in itself. 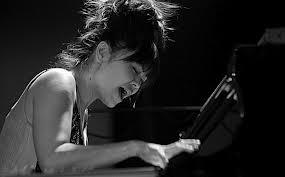 Loping across a room was the best way to say it, in that moment. Words are precise. But unless you have someone’s full attention, and unless you can speak in a way that the person understands, words can miss the mark. Something seen, felt, or acted upon can go straight into our neural-system the way words may not.

Evolutionary leaders, good teachers and communicators instinctively use multiple levels of communication to get their message across.

I would never forgot the Latin for ‘garden’ after my teacher woke me from my schoolgirl daydream, sent me out to the vegetable garden behind the classroom, where I shouted the word ‘hortus’ three times, as loud as I could.

Recently, I was teaching a group of business-coaches about rapport, that elusive ingredient that makes for the best communication and connection. I explained how good rapport is like walking in-step beside someone, not too fast, not too slow. By demonstrating what that might actually look like, walking side by side with one of the participants, the lesson went straight into the body in a way that everyone in the room could feel. As several people said at the end of the day, “I understand rapport now in a whole new way.”

The psychiatrist master of communication, Milton Erickson, is still celebrated as a transformational healer who transcended categorization. His work remains an inspiration to some of the most effective, communicators, healers and evolutionary leaders to this day. He sometimes asked new clients to climb to the top of Squaw Peak, just outside of Phoenix, before he would agree to meet with them in person. As they climbed the steep trail in the Arizona heat, some of them must have wondered why he had given them such an arduous task. Others perhaps, surprised to confront some of their own anxieties in this simple assignment, might have projected some imagined meaning, “Damn Dr. Erickson, how could he have known .. !?”

We make up stories. Stories live in our bodies, and play out in our lives. Oftentimes we can bring them to the surface with dance, ritual, hypnosis or trance, more easily than we can with words. There are indigenous cultures who enact their dreams each day to bring their unconscious stories out into the world, in order to learn the wisdom and truth in them.

In our own culture we lack a consistent way to uncover and integrate the stories that drive our lives, both individually and collectively. At Five Changes we have adopted, among many other things, the Ericksonian and shamanic practices of Psycho-magic. For example, we sometimes task our clients with assignments that may seem illogical, counter-intuitive, absurd, or confusing. What we’re doing is challenging the ‘meaning-making’ process itself. We’re challenging how stories are made up and remade.

A lot of teachers and coaches tell you to find your own way, to be uniquely yourself. Others suggest you follow their example. They say, “Do it like me. There’s no need to reinvent the wheel.” Except, you can’t do it quite like them, because you are indeed uniquely yourself, and besides, the moment when what they did worked so well for them may be long gone.

The question is always — how do we really change? How do we learn to tap into the neurologic process by which meanings and stories are made? How do we connect with the world so that our own evolutionary process relates to everything that’s going on around us without overwhelming us? Although we have learned a lot about neuro-science in the past few years, there are still very few applications where it is used fully, holistically, and effectively.

The work of Five Changes has been an evolution of three decades to answer the question: how do we help evolutionary leaders co-create the world we have been longing for?

Spiritual Evolution, Personal Development, Professional and Business Development, Social Engagement or Activism, Brain Science, Accelerated Learning .. none of these are enough on their own. Nor is a simple amalgamation of all of them together, by itself, enough.

We call the integration of all these elements Evolutionary Leadership. It’s how you can come out of the closet you’ve been hiding in, to align with your highest values, serve, and contribute in the way only YOU can, in the 21st century and beyond.

If you are not already in touch with us through Five Changes watch for upcoming announcements about our new programs.

« Your Vision is Bigger than You» Retreat – Your Soul-Purpose