Where we meet with clients 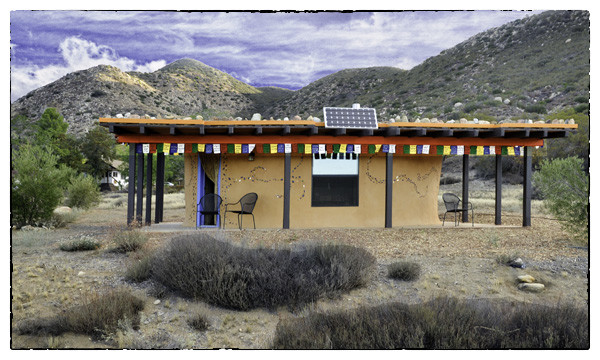 We named this building Ithaca, because Ithaca is the island home of Odysseus, where he returned after the challenges described in the Odyssey; and also because we wanted to bring the spirit of the ocean a little closer. Ithaca is a metaphor for homecoming. The work we do with NLP Coaching and Hypnotherapy clients is like their homecoming ..

Like stepping through a doorway into another dimension .. and coming home to remember the power of your spirit, your creativity, your purpose, and the ease with which you can master your internal states.

.. and then look back at the world through fresh eyes and return.

There was a time when everything was customized, handmade. We made this building in the old way; straw-bales and adobe. The exterior clay walls are covered with handmade mineral paint we mixed. The lime and ferrous-sulphate reacts with the adobe clay to form crystal particles that are resistant to erosion from wind and rain. It also reflects the changing light in a way that is entirely unlike commercial paint.

Likewise the work we do inside is customized, hand-made, transformational, beautiful ..

And there’s always time for goofing around. Michele painted the flags, and from time to time became completely entangled in them .. as you see

Texts are from Hesiod, Homer, and Cavafy and translated by Caitriona.

As you set sail for Ithaca
hope the voyage is long,
full of adventure, full of discovery.
Cannibals of Lamos, monstrous Cyclops,
wild Poseidon’s fury,
don’t be afraid of them.

You’ll never even see them
if you hold your thoughts high,
and allow the sweet excitement
of spirit and body guide you.

You’ll never meet
Cannibals, Cyclops.
Poseidon’s storms
unless you bring them along
inside your soul,
unless your soul
sets them up
in front of you.

Hope the voyage is long.
Summer mornings
will carry you
into sparkling new harbors,
of pleasure and ecstasy.

Places seen for the first time
upside-down islands
waterfalls
tumbling into the sky.

Sail there!
Trade with the Phoenicians,
for mother of pearl and coral,
amber and ebony, agate and jade,
attar of roses, and frankincense,
every perfume you can find,

Lay anchor in Alexandria
trades stories with the wise ones.

Always guard Ithaca in your mind
but don’t hurry.
You are destined to arrive.
Don’t hurry the journey,
don’t hurry at all.
It’s better that it lasts for years.

You will be old
when you reach the island,
rich with all that you have become,
not expecting anything of Ithaca.

Ithaca gave you the ocean.
Without her you would not have set out.

She has nothing left to give you now.
And if you find her poor do not blame her,
wise as you will have become,
so full of experience,
you will have understood by then
what these Ithacas mean.

Hear the Universal Call to Make Your Dreams come true

‘I have a dream that my four little children will one day live where they will not be judged by the color of their skin, but by the content of their character.’

These were the words of Dr. Martin Luther King Jr. in his famous speech in  August of 1963 from the steps of the Lincoln memorial during the Civil Rights March on Washington D.C. His dream is noble, but what makes your dreams come true? They resonate, and have guided my thoughts, and motivated my actions since the time I heard them as a young child, watching him on television that day.

Growing up as a mixed race person, those early years of my life were marked with my own personal civil rights movement, in which all the races divided inside me, wanted to be unified and at peace, after all I am Japanese and American, and born out of my parents crossing a taboo racial line!

My parents met in Japan during the Korean War. My father was determined to marry my mother, even though there were deliberate attempts from his higher-ups in the military to keep them apart.

Japan was still under American occupation and there was a lot of resistance in my mother’s family to this marriage taking place. The fact that they would be married in a Catholic Church in Kobe with a western-style wedding did not help.

Recently there has been increased awareness of an ever-growing multiracial population. The New York Times recently published a series of nine articles about the ‘Multiracial boom and the impacts it is having globally.’

Now that there is a more ‘visible’ population of multiracial folks, I feel called to be more at home in my own multiracial skin, and lead others to do the same.

Recently I have lead several workshops for people of mixed race and identity. My intention was to begin a process of healing and transformation, but in the spirit of celebration and inspiration.

The workshops were so moving and empowering that I felt moved to write something here. They are the expression a a life-long dream, and from them I can now embody a clear sense, more than ever before, that now:

I am not just the sum of the parts of a mixture of races divided inside me,

I am not without a homeland , because I claim a deeper residency, as a citizen of many places

I am the wholeness of my self-acclaimed  integration, in an expression of life that celebrates diversity as part of its core essence .. and my home is planet earth.

However, this was not always so.. I was born into and inherited a pseudo revolution. If you are a person of mixed-race your parents, or parents before them, crossed a clearly defined, or implied, racial line. This quiet revolution plays out throughout your family life, and is mirrored by the outside world in ways that may have confused, frustrated, enraged, perhaps revolutionized you, or perhaps sent you into a turmoil of denial and negation.

I became a chameleon, a shape shifter. I learned to assimilate the environment, other people’s behavior, and their communication styles, as a way to survive, as a way to fit in.

Then I began to identify myself as exotic, special, the odd one out; but never knowing where or how to I fit in. At school I was sometimes adored, sometimes hated, or sometimes just plain invisible. Sometimes I was forced to choose loyalties or be disowned by all. Many of my personal dreams were lost or forgotten in this maze of complexity, this dizzying dance on the hot coals of identity-politics.

The good thing about this journey is that I became resilient, sensitive in ways that many people weren’t, to what was going on. I developed a wisdom and understanding beyond my years. I learned to see complex things clearly. I was a bridge, a natural mediator. I learned to see from a multitude of perspectives and cut through polarized ways of thinking and being. I learned that there were definite advantages to having a multi-colorful heart.

Of course, the journey towards being an integrated, congruent person, is not unique to multiracial folks; there is a universal call, an ache in all of us to find our place, to be at home in our skin, to live an embodied life – full, and with purpose.

I remember a time early in my career as a spiritual teacher, both meditation and martial arts. I was invited by some of my students to a performance of a well-known spiritual-psychic dancer.

The audience was asked to put their names into a large bowl as they entered the auditorium.

The performer would pick some names from the bowl to announce the winners. She would then perform an intuitive dance-portrait of the people she picked.

The auditorium was packed with hundreds of people, and my name was the first to be drawn that evening.

What a magical moment! She began dancing. Her dance was strange, exotic. Her movements were deliberate, trance like, and mysterious. It felt like an ancient dance, a ritual from long ago..

There was also live music accompaniment which illuminated her movements. Her dance sent chills up my spine.

And then all of a sudden she stopped, abruptly. Then the music stopped, and she hid behind one of the curtains!

Well, I wasn’t going to have it! I thought … such presumption on her part!

I stayed for the rest of her performance-portraits, feeling uneasy, feeling that she had let me down. But what was I expecting? That she would finish ‘my dance’?

That night, I decided to take things in my own hands, and finish my own dance.

We picked up some food and went to one of my students house. She had an antique sword that had been in her family for generations, with a wooden scabbard and live blade inside. It was perfect; I took the sword and I finished ‘the dance of me,’ as only I could do it!

I learned that all of our experiences and the world itself and everything in it calls us forth into action, to find our place under the sun, to be at home, to be magnificently human from our own unique perspective, and to share that with others. Why not, what else will you do with your dreams, but live them?

Why not transform your history into the fuel for your life. Why not be at home in yourself, in this world, and in your skin, and let your experiences good bad or indifferent, illuminate your path, wherever you are, and open you up to your vision, your purpose, your dreams lived.

Here are the words of Mary Oliver

Tell me about despair, yours, and I will tell you mine.
Meanwhile the world goes on.
Meanwhile the sun and the clear pebbles of the rain
are moving across the landscapes,
over the prairies and the deep trees,
the mountains and the rivers.

Whoever you are, no matter how lonely,
the world offers itself to your imagination,
calls to you like the wild geese, harsh and exciting
over and over announcing your place
in the family of things.

My work is helping others to live their dreams, to dream bigger ones, To hear their universal call and to step into them.

Your own work can be of huge benefit to others when you start living into your true power, whatever it is you do. You benefit others just by being fully yourself, being integrated and congruent within, living joyfully in the world, connected, loved and loving, whole, and living on purpose, with purpose. If you are so inspired to have a conversation about this please call me.